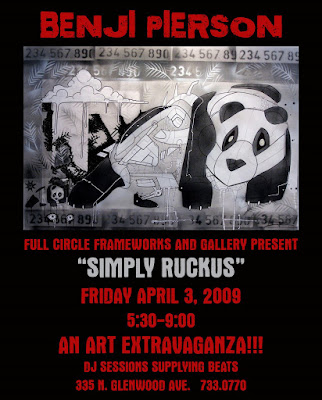 What more could be said about Benji Pierson AKA "Ruckus" The man, in my opinion is one of a kind. If you know him, you would know what I'm saying and if you don't... well...better at least meet him once.

Born and raised in Seattle and dealt with Epilepsy for the first 15 years of his life. In turn, that gave him plenty of time to draw. He admired artists such as Joe Johnson and Ralph McQuarrie. Both Sci_Fi art geniuses. He went to college for graphic design but ended up quitting to go snowboarding. He moved to Jackson Hole in 2002 and has been causing a Ruckus since!

He is the Art Director for Storm Show Studios and he is also the primary artist for Rob Kingwill's Avalon 7 snowboarding collective. He Sci-Fi Graffiti style has been seen all around town and just recently at the Snake River Brewing Company. If you missed out on getting one of his pieces... here is a great opportunity to grab one while they are hot! There will be a variety of price ranges so don't be shy.

Dj Sessions from Seattle will also be there spinning some fresh beats for the crowd and who knows... Maybe there will be some Celebs there!
Posted by ROCKY at 9:45 PM